The U.S. military trusts American manufacturers to make missiles, fighter jets and nuclear submarines. But can they be trusted to produce safe sneakers?

America's vestigial shoe industry insists it can deliver. After years of debate, the Department of Defense has agreed to consider that possibility.

Under a provision of 1941 legislation known as the Berry Amendment, the Defense Department must buy boots, uniforms and certain other items that are 100% U.S.-made. It can make exceptions if U.S. manufacturers don't have the capacity to make what it needs, and has done so for athletic shoes needed for boot camp.

The Army, Navy and Air Force "allow members to select and wear the type and size of athletic shoe that provides the greatest comfort and reduces the potential for injury," regardless of where they are made, a Defense Department official said.

But now, under pressure from the domestic shoe industry and lawmakers, particularly those from Massachusetts, Maine and Michigan that have some of the country's few remaining shoe plants, the military is going to review its exemption for U.S.-made sneakers. 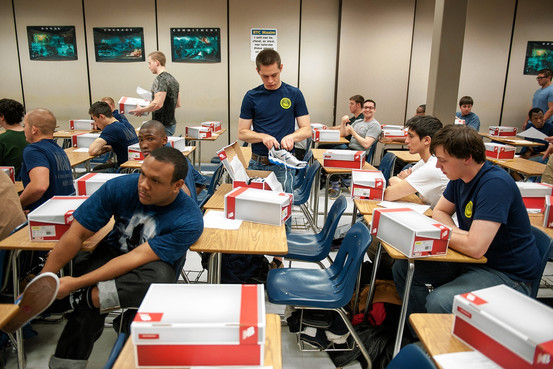 Earlier this year, defense officials asked footwear makers to provide information about their ability to reliably produce the sneakers domestically. If the shoemakers convince officials that they have enough capacity to make the shoes in the U.S., the department may order that Army, Navy and Air Force personnel be outfitted with U.S.-made sneakers.

Shoemakers say that will add jobs both at their plants and at suppliers. The department said no decision has been made yet and it doesn't know when one will be.

Rep. Mike Michaud, a Maine Democrat, has presented President Obama and Defense Secretary Chuck Hagel with black mesh New Balance athletic shoes in an effort to show them the possibilities of local production. 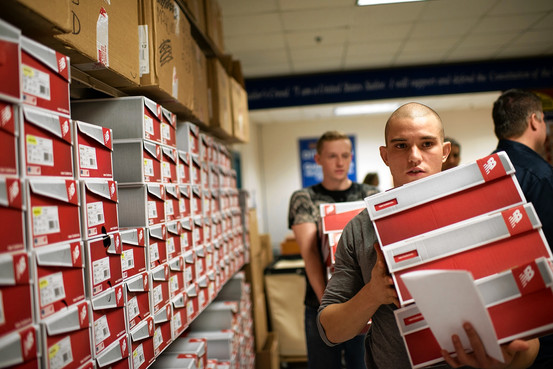 Orders from the military could create 200 jobs at New Balance, which employs about 2,900 in U.S. Rob Hart for The Wall Street Journal

"It's mind-boggling why the president doesn't do an executive order" requiring the Defense Department to buy U.S. made sneakers, Rep. Michaud said. Sen. Susan Collins, a Republican from Maine, said: "The president keeps saying he wants to promote American manufacturing. Well, here's a chance."

A White House spokesman referred questions about the matter to the Defense Department.

Most U.S. shoe factories closed in recent decades as production shifted to Asia. Imports account for about 99% of the U.S. market, according to trade group Footwear Distributors and Retailers of America. The U.S. footwear industry employed only about 14,000 people as of mid-2013, down from more than 40,000 in 1997.

Boston-based New Balance, owned by James S. and Anne Davis, is the only U.S. maker of athletic shoes with large-scale production in the U.S. Its five U.S. plants in Massachusetts and Maine make about 25% of its shoes sold in the U.S.; the rest are imported.

New Balance spokesman Matt LeBretton said the company has spent more than $1 million on equipment and training to produce the midsole, which is normally imported. Orders from the military could create 200 jobs at New Balance, which employs about 2,900 in the U.S., and more at suppliers, he said.

The armed forces give recruits stipends of about $65 to $70 to spend on athletic shoes, though sometimes it makes them buy a particular brand. Mr. LeBretton said New Balance could supply shoes in that range. "This might actually save them a few bucks," he said.

New Balance does sell some of its imported or partially U.S.-made shoes through military outlets, but wants the military to buy 100% U.S.-made sneakers, which would give it an edge.

Late on a recent Tuesday evening, buses dropped off new recruits for boot camp at Naval Station Great Lakes, just north of Chicago. The would-be sailors were presented with new military-standard clothing, from T-shirts, underwear and socks to a pair of custom-fitted New Balance running shoes that come in a box bearing an American flag.

Petty Officer First Class Andrew Purchase, 33 years old, watched Navy recruits try on running shoes. He has been running in New Balance since high school and said he likes the fit. It's "an added bonus," he said, when they are from an American company. "It's not 100% American-made, but most of it is," he said.

In the other room, Airman Noah Edwards, 19, who recently finished boot camp and was helping recruits determine their best shoe sizes, had a less philosophical approach to military running shoes. "I got issued what I got issued," he said.

Wolverine, based in Rockford, Mich., and known for its Hush Puppies and Keds brands, makes most of its shoes overseas.

But Wolverine has a plant in Big Rapids, Mich., which produces Bates combat boots, among other things. That plant could make sneakers, said spokesman David Costello. Sales of such shoes to the military would help Wolverine and other firms sustain a base in the U.S., he said.

Tom Capps, president and majority owner of Capps Shoe, in Lynchburg, Va., said the U.S. should avoid being entirely dependent on Asian shoe supplies in case it ever has "an altercation with the Chinese."

The military still has to be persuaded that U.S. shoe companies can ensure all recruits get the right fit and style. Wayne Hall, an Army spokesman, cited the stresses soldiers undergo during long runs at boot camp.

Rep. Niki Tsongas, a Massachusetts Democrat, said the domestic suppliers can provide a good range of shoes. For soldiers whose needs couldn't be met with American-made shoes, she said, waivers could be granted.

Orders from the military wouldn't bring the U.S. shoe industry back to its former glory, but they could be significant. Rep. Tsongas estimated that the military had spent more than $180 million on cash allowances for new recruits to buy sneakers since 2002.

Each year about 47,000 recruits come through the Naval Station Great Lakes, for example, and all of them get a pair of sneakers.

Petty Officer First Class Thelma Ruiz, a 38-year-old instructor who trains Navy recruits at the base near Chicago, prefers American-made shoes, but said what matters is that shoes fit well and perform. "Good shoes are good shoes," she said.

The Shoe Industry: A Perfect Fit for Lynchburg Posted on July 03, 2014

Should America Build a Strategic Shoe Reserve? Posted on July 03, 2014